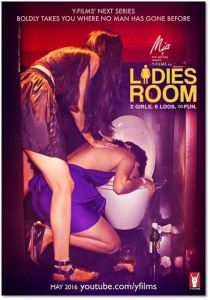 After racking up over 12 million views across its six episodes, Y-Films’ hilarious, wild, raucous and unapologetic smash-hit web series, Ladies Room, has added another feather in its ‘very feathery cap. In its end-of-the-year special, renowned Hollywood e-magazine IndieWire has rated the series as one of the year’s best, in a list that includes comic legend Jerry Seinfeld’s acclaimed ‘Comedians in Cars Getting Coffee’. Ladies Room is also the only Indian series to make it to the list.

The series that launched to much love and incredible critical acclaim, with Anupama Chopra’s Film Companion comparing it to  comedy icon Tina Fey’s 30 Rock, is about the madcap adventures of two 20-something Mumbai-based bffs, Dingo and Khanna. The show is set in six different loos, and features the two buddies as they struggle to grow up even as they grow old.

In his list, Jude Dry from IndieWire praises the show for its “high energy buddy dramatic” noting how it “made waves in India for its unconventional portrayal of two ‘female bros’”. Dry calls the show “high farce at its best” and states “It may be subtitled (they use a mix of Hindi and English, called Hinglish), but ‘Ladies Room’ speaks a universal language: Damn funny.”

Previously, series listed by IndieWire in this category have gone on to win prestigious awards like the Emmys and have been adapted for television by networks like HBO. With this one-of-its-kind feat, Ladies Room has put the Indian web series on the world map, continuing the legacy and the high, universally appealing standards that Y- Films has set all of last year with clutter breaking web content that has been recognized on global platforms.

Y-Films’ 6-Pack Band won the highest award for creativity in the world, the Cannes Grand Prix Glass Lion award and the highest online honour with a Honorary Webbys last year. These were followed by a string of high-profile awards, from eleven Emvies to an Indian Television Academy Award. More recently, Ashish Patil, Head of Y-Films, was featured in Ad Age Magazine as the 50 Most Creative People in the World, alongside the who’s who of content, from Beyonce, Prince and David Bowie to Ryan Reynolds, Dwayne Johnson and Tom Ford.

The third Y-Films series, Ladies Room, is directed by Ashima Chibber, whose directorial debut was the hilarious critical and commercial hit, Mere Dad Ki Maruti, and produced by Ashish Patil, Head of Y-Films. The comedy stars two actresses from the YRF talent roster in its lead, the talented Saba Azad and the electrifying new find, Shreya Dhanwanthary, and features the writing of Ratnabali Bhattacharjee and Neha Kaul Mehra. The first four episodes of Ladies Room are OUT NOW on www.youtube.com/yfilms. Mia By Tanishq is the presenting sponsor of the series.